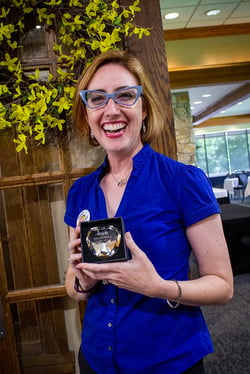 Now in its 30th year, PALNI is a nonprofit organization supporting collaboration for library and information services for 24 private academic institutions throughout Indiana. The PALNI community comprises more than 150 employees from those libraries, serving approximately 47,500 students and faculty statewide.

This year’s award recipients were nominated by their peers and represent a variety of organizations, roles, and responsibilities within the consortium. Awards were given in six categories that support PALNI’s mission of enhancing teaching and learning by optimizing resources and services while strengthening leadership and professional development.

“The PALNI Awards were created to recognize what we do together,” says Kirsten Leonard, Executive Director for PALNI. “Our ability to function effectively only works because of the people who contribute their time and expertise to our mission. Every person in PALNI is important and provides something we need to be successful. These awards are one way we recognize those efforts in deep collaboration.”

Award categories and honorees for 2022 include the following.

This award recognizes the major advancement of projects during the year, and focuses on highlighting people newer to PALNI collaboration. Recipients include:

This award recognizes long-standing service or broad investment in advancing PALNI as a whole or a major impact on a PALNI initiative over multiple years. The Hall of Fame award is given to those who have helped to create the collaborative environment, strategic direction, and success PALNI has achieved and who embody the PALNI culture of respect and innovation. The recipient is:

This award recognizes those who embody PALNI’s deep collaboration and supportive culture in their work in PALNI groups and initiatives. It honors individuals who exemplify the culture of PALNI. Recipients include:

This award recognizes leadership in building, supporting, and advancing the tenets of deep collaboration. It is given to select staff and directors who have led the way in working together more deliberately and effectively. Recipients include:

This award honors those in PALNI who have articulated the nature of the changing information services landscape and provided long-standing leadership to work together to meet those needs. Recipients include:

New in 2022, this award recognizes outstanding contributions to PALNI’s strategic direction of building partnerships with organizations outside of the consortium. The recipient is:

“Building relationships and collaborating strategically with external partners is just as important as the work we do within the consortium,” Leonard says. “At PALNI, we believe we achieve more together. Our award winners represent the full gamut of PALNI collaboration and innovation, and I am so grateful to have them as part of this organization.”

To view all of PALNI’s current and past award winners, see PALNI Awards and Recognition.

About the Private Academic Library Network of Indiana

The Private Academic Library Network of Indiana (PALNI) is a non-profit organization that supports collaboration for library and information services for 24 colleges, universities and seminaries throughout the state. From its inception in 1992, the PALNI collaboration has been a key avenue for its supported institutions to contain costs while providing more effective library services. More recently, PALNI has adopted a model of deep collaboration that pools resources and people as a tool to expand services while keeping costs down. PALNI’s board of directors, composed of all 24 library deans and directors from the supported organizations, convened a Future Framing Task Force in 2019 to address ongoing demographic challenges in higher education. The board has escalated this work in the wake of COVID-19, as the consortium seeks to manage increased need for online support while reducing costs. To help address these financial challenges, the PALNI board of directors made the commitment to hold flat the costs shared among the supported organizations over the next 10 years. Simultaneously, PALNI is expanding collaboration within its institutions and with external library partners to address challenges and build cost-effective services. Visit the PALNI website for more information.

Four New Inductees to the PALNI Hall of Fame 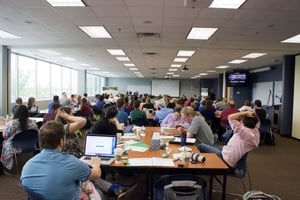